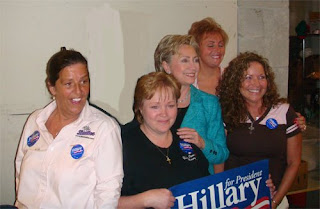 Hillary Clinton at the Hot Metal Diner in Pittsburgh, PA.

I think most Baby Boomers love anything from our youth. I have always loved diners. There are many diners around the United States, although for many years, they mostly disappeared as other 1950's things did, such as the drive-in movie theaters and hula-hoops. As the Baby Boomer generation has come of the age of confidence and has been delving into starting their own small businesses, there has been a comeback of these bye gone venues. There is Sonic, the U.S. national chain, carhop, drive-in restaurant. In the Pittsburgh, PA area, we have a local area family style restaurant chain called Eat n' Park. When I was young in the 1950's and 60's, they had carhops as well. The restaurant still exists, but they haven't had the carhop feature for many years. Carhops, being the waiter/waitress who comes out to your car and takes/brings you your order. In the early days of Eat n' Park, the carhops came out to your car and took your order. When it was ready, they brought it out on a tray that would sit on your car window, partially wound up. Well, I'm getting a bit side tracked on the subject of 1950 Baby Boomer nostalgia, which could be a large article in of itself.

Here is a review of one of a few local Pittsburgh area diners, who's owner belongs to a group of women entrepreneurs called The DinerLadies. I like to promote local businesses that I love to any of my local readers. This diner has a national claim to fame as it was actually visited by Hillary Clinton during her 2008 primary campaign for the Democratic President candidacy.

If you have a favorite diner memory or location, please let me know in a comment by clicking on the comment link under the title of this article!

When I was a little girl, I loved to go to Meyers Lake. It was a very, very, very, very small version of Disney World but to me it was bigger than life.

When I became a teenager, the Park had deteriorated so badly that they shut it down.

Sadly, I have no pictures to remember it by---only the faded memories in my head.

My dad always tells me about this kind of stuff and I never really thought much about it until now. I guess it would be kind of cool to see that stuff and actually understand what he's talking about! : )