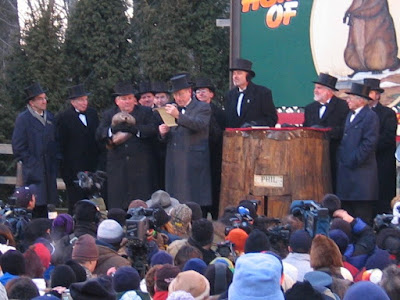 Groundhog's Day is an event that, if you're from the Pittsburgh, PA area, you have known about most of your life. Obviously with the hit movie of Bill Murray's, it became much more nationally known. It's just a fun thing that most people who attend, do so to have a bit of fun in the middle of a Pennsylvania bleak winter. This year, it came at the same time as everyone was waking up after a night of celebration of the Pittsburgh Steelers winning their 6th Superbowl. I mean, the city and most of the western part of the state of Pennsylvania are pretty much flying with good feelings today....and in these tuff economic times....is a good thing!

So, for the fun of it, check out Punxsutawney Phil's website for information about the history and Phil's 2009 prediction for winter!

Awoke to the call of President Bill Cooper

And greeted his handlers, Ben Hughes and John Griffiths

After casting a joyful eye towards thousands of his faithful followers,

And a bright sky above me

Showed my shadow beside me.