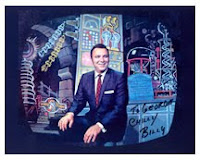 Remember when we Boomers were young and wanted to stay up as late as we could on a Saturday night, if we were allowed to stay up, and watch the only program that was still on in those days. Baby Boomers can remember the days of 3 or 4 channels on TV, the 3 networks and PBS and on a good night of clear weather, you may have been able to get a fuzzy picture of a UHF channel with that extra loop UHF antenna.

Usually it was so snowy of a picture that you couldn't tell what was on anyway, but it was very cool trying. So as TV programs would end their programing about midnight or 1AM, when it came to the weekend and the school week was over, if you were a person who loved to stay up, as I did, and lived in the Pittsburgh, PA viewing area, you watched WPXI, Channel 11's Chiller Theater hosted by Bill Cardille.
The Chiller Theater, late night concept actually began in New York City in 1961, but Pittsburgh's Channel 11, then named WIIC call letters began it's Chiller Theater in 1963 and was hosted by Bill Cardille, Originally from Sharon, Pennsylvania, Cardille was long a fixture on the former WIIC Channel 11, the NBC affiliate in Pittsburgh, and was the first voice heard when the station went on the air on September 1, 1957.
Any Pittsburgh area Boomer knows and loved Chilly Billy, as he became known as, and loved to watch those horror movies all night, or as long as they could stay awake. I always loved to watch the horror classics such as Frankenstein, Dracula, the Wolfman with
Boris Karloff                                Bela Lugosi                       Lon Chaney Jr.

There were many terrible horror movies during those years also, that still have some cherished memories to many. There were all the Japanese Godzilla type movies that were translated into English, with no syncronization with mouth moving what-so-ever. They were terrible back then, but are still part of the memories of those days. Many was the time that I would watch whatever movie was on because I just wanted to stay up as late as I could anyway.
So here is to one of our, and personally my, heros of my youth, Bill Cardille, for giving so many of us great entertainment and memories!
You can find out more about Bill Cardille, who is celebrating 52 years of broadcasting in Pittsburgh, PA at his website: http://www.chillertheatermemories.com/TheLab.html
Thanks Chilly Billy!!!!
Posted by David at Monday, September 07, 2009

I HAVE GREAT MEMORIES OF THE SHOW HOSTED BY CHILLY BILLY AND THE CLASSIC HORROR MOVIES THAT I WAITED FOR ALL WEEK TO WATCH AS A YOUTH LIVING IN WESTERN PA.