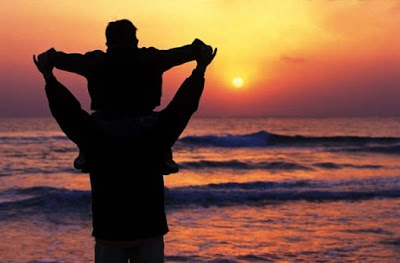 I recently added some of my compositions of what I call Bed & Breakfast, or doodling music on my MySpace music page. Then I added my first post on the blog on that site about my current journey in music and how I have been lead or pointed back to bringing music into my life. This prompted me to think of the beginnings of playing professionally and how my Dad made that all happen.My father was a true hero to me and he knew that I loved him but our family didn't really display outward affection, so I, regrettably, never actually said the words, "I love you" to him. Why do we not realize how important that is until it is far too late so often? I came into this world, I think, as a surprise. My parents already had two children, a girl and a boy, so why another, and 10 years after the last? The odd thing was that in those days of the late 1940's, it would have been odd to name your first born son after your father-in-law, which is what they did. That may have been a clue as to how my father and brother had a troublesome relationship. They were at each other all of the time that I was around. Then all of a sudden, 10 years later, I was born, another son and THIS time, I was named after my father, David. Such was the nature of our relationship. We were very close and did everything together, much of which I did not care for, as I was his helper around the house. Many of my earliest memories of him where of my trying to sneak out of the house early on a Saturday morning before he had the chance to say, "We're going to pull weeds in the yard all day"...ugh.... I hated the hard work I had to do with him! It seemed, at the time, that all my friends were out playing and I was digging, pulling weeds, laying blocks, moving cement, building kitchens, and on and on.... You would have thought that I would have learned all of those trades that he knew, but I was so busy hating the hard work, that I have found throughout my life a sharp dislike for doing work around my own house. Now, I know better! The times we spent together are precious memories to me know that he is gone!One day, when I was about 12 years old, my parents went into a music store to look at organs and pianos. The salesman, who obviously knew what he was doing, sat me down and placed these cardboard things on the keys and music that I could follow and play songs right away. I lost myself into it. My parents went shopping in a few other stores and came back a couple of hours later and I was still sitting there playing. (In those days, parents could actually leave their child in a store like that and feel that I was safe). My Dad saw my passion for music and bought the organ and signed me up for lessons that evening. He was with me for each lesson, every concert I ever played and every place I every played again from then on. When I began playing in bands at the age of 16, he came to every bar we played, recorded us on his reel to reel tape player and even co-signed for the other guys in the band for them to buy their instruments when their own parents would not. He may have been living his dream, but he was also giving me mine.No matter how successful, or not, I am with my life, I know that my passion for music will never be a wrong choice for me and I know that my drive and inspiration will always come from my Dad! Thanks Dad for seeing what I had in me and for pushing me in the right direction. I back on the right path now!
Posted by David at Thursday, July 17, 2008

Email ThisBlogThis!Share to TwitterShare to FacebookShare to Pinterest
Labels: family