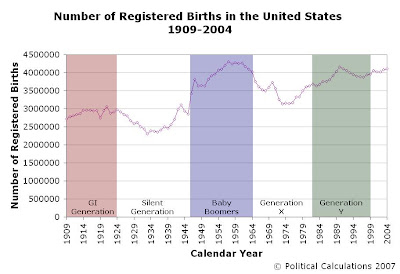 Here is a great chart showing number of births in the US from 1909 - 2004. Note the interesting fact that Generation Y is at the same levels as the Baby Boomer generation and still going. The data for this chart is taken from the U.S. National Center for Health Care Statistics (U.S. National Center for Health Statistics, Table 1, Live Births, Birth Rates, and Fertility Rates, by Race; United States, 1909-2000 and Births: Final Data for 2004, tables E, 1, 18, 32. ) This looks like the Generation Y and the next generation will put the Boomers to shame in numbers. Along with this will be all the same types of issues that us boomers face but probably compounded.

An interesting thing I didn't know was that although the baby boom number of births began to decline around 1959, birth control pills were introduced in the early 1960's and widely used by 1964, which marked the end of the boomer generation. (from Wikipedia )

This same article points out that there was two phases of the Baby Boomers, those born between 1945 - 1957 and a second phase called many names like Generation Jones or Echo Boomers, born from the mid 50's to the mid 60's. The article points out that one defining event separates the two phases, the Vietnam War. The early boomers went through the years when you could be drafted into the military to go fight in the Vietnam war. This part of the boomers also were the war protesters. The second half of the boomers did not have to face the draft and lived during the end of the war.

Very interesting stuff!! Read the Wikipedia article for a lot more into.